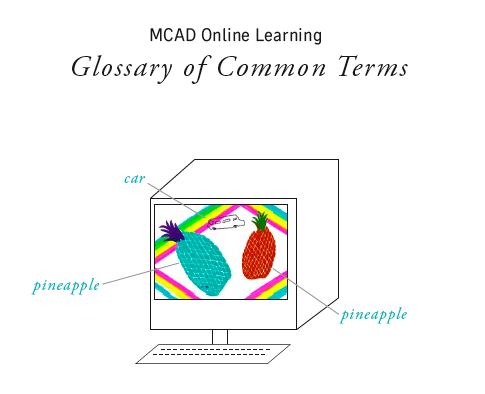 Explanations of commonly used terms are below or are downloadable in the Online Learning Glossary. In case of any further questions, feel free to contact MCAD's Online Learning Department: online@mcad.edu.

Asynchronous:
Not simultaneous; not concurrent in time. Not occurring or existing at the same time. At MCAD, asynchronous online courses do not meet. There are numerous deadlines for tasks and assignments, but students work according to their own schedules.

Pixel:
Abbreviation for picture element. The smallest component of any digitally generated image, including text (imagine one dot of one color).

URL:
A Uniform Resource Locator (URL) is a string of characters conforming to a standardized format, which refers to a resource
on the Internet (such as a document or an image) by its location. Example: http://www.mcad.edu/

Optimized:
A file that has been properly saved for the web is called "optimized." For Blackboard, this is most commonly a JPG image. A rough guideline for JPGs: image dimensions should not exceed 500 pixels in either width or height and the total file size should be no larger than 150k.

Compression:
A process that reduces the number of bytes required to define a document in order to save disk space or transmission time. In general, files are "decompressed" as they are opened by the recipient.

File Type:
A letter code placed at the end of your filenames shows what programs are allowed to open which files. .JPEG, .GIF, and .PNG are all file types that open in Blackboard.

Forum:
In the Discussion Board, a place for holding messages that create a discussion. Similar to email, but all classmates can respond to what is posted.

Posting:
Composing a message to the forum that_s visible to all classmates.

Thread:
Someone posts a message on a forum that is visible to everyone. A user may read it and then have the option to post a reply that will also be visible to everyone, thus a discussion can build up without all users having to be online at the same time.

Flaming:
Rude and/or emotionally-heated responses to other people's posts.

Flooding:
Posting many times without forethought to the same forum, pushing other people's posts to the bottom of the forum.

TIF or TIFF:
Abbreviation for Tagged Image File Format. Used for scanned, high-resolution, bitmapped images and for color separations. Tiffs are not recommended for use in Blackboard.

Can't find what you need? Let us know how we can help!